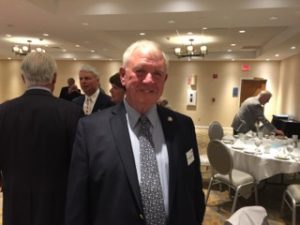 In this the 60th Anniversary year of the Osterville Men’s Club, we are focused on giving back to our community.  We have all been successful in our careers and we now have time to give something back, but what can we do?  Perhaps it could be something that relates to our past employment or something we always wanted to do but could never find the time.

Our member, Joe McWilliams, as an undergraduate student at the College of the Holy Cross, had enrolled in NROTC and through this the government helped to pay his way through college.  As a result, he has always been grateful for the services provided by the government and felt that he should give back in some way.  When he and his wife moved here from Medfield 10 years ago, Joe’s got involved in a number of volunteer activities, some year round and some seasonal.  From February until April, under auspices of the AARP Foundation, Joe prepares income tax returns at the Hyannis Senior Center and the library for senior citizens and people of modest incomes.  He gets training every year in tax preparation and the software they use, which is approved by the IRS, and he is tested after training.  He says they don’t do complicated returns but what they do is a big help to those who can’t do their own and don’t have a lot of money to pay someone else to do them.  Joe does not have a tax background but spent much of his working life working with financial matters and numbers.  He worked for an insurance firm, became an insurance broker, then worked for an insurance consultant and finally went into business for himself as an insurance consultant.  He worked mostly with big companies that had losses that were too high resulting in higher insurance premiums.  He tried to solve problems that would reduce losses and in turn reduce client’s insurance premiums.

Joe also volunteers year round at Cape Cod Hospital moving patients around on gurneys and in wheel chairs, getting them to the operating room, to the recovery room etc.

He volunteers for CapeAbilities helping with the spring cleanup at the farm in Dennis and he has worked in years past with the Hyannis Senior Center driving a van taking folks to their appointments.

All of these activities require volunteers to function, keep Joe very busy and give him a real sense of satisfaction for having given something back to our community.

Joe McWilliams moved to Cape Cod about 10 years ago from Medfield, MA where he lived with his wife and raised their three children.  For many years they had planned to retire to their second home on Lake Winnipesaukee in New Hampshire.  We should all be very glad they decided it was too quiet there in the winter and Cape Cod offered a more lively year round retirement experience. 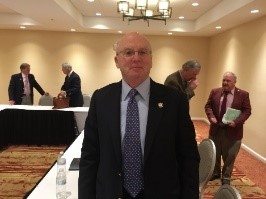 Tim Moran has been our Treasurer for three years but what do we know about him? Born in the Worcester area, he graduated from UMass Amherst and then went into the US Army Signal Corps where he was involved in the installation of telephone exchanges with thousands of telephones on bases throughout the US. He spent much of his time at Ft Ord, California. After the army he went to work for Arthur Anderson auditing large companies. He moved on to Putnam Investments where he became Treasurer and Head of Risk Management and then to Fidelity where he became CFO of the Retail and Institutional Brokerage Business and Head of Risk Management. Finally, in 2008, he went to Morgan Stanley in New York City to be CFO of the Global Wealth Management business arriving the week of the Lehman Brothers collapse and implosion of the financial markets. What timing!

In 2010 he retired to Cotuit, MA with his wife Cindy and through golf became a member of the OMC. In addition to golf, Tim enjoys off shore fishing where the Gulf Stream brings Tuna, MahiMahi and other fish commonly found off Florida to the canyons off our Continental Shelf. He also enjoys travel to visit his adult children. One daughter lives in Hollywood where she is the studio operations manager for the company that produces such programs as The Walking Dead. Tim’s son teaches at a medical school in Las Vegas and his second daughter manages the special education program in the Dracut school system and raises her two children (Tim’s grandchildren).

Tim had very positive things to say about the OMC as it has been a great source of friendship and activity since he arrived on Cape Cod.

Clearly Tim’s professional experience has qualified him to be our Treasurer and I would be very interested to hear some of his inside stories about the financial crisis of 2008!

What do you know about our new OMC president, John Caney?

After two years of college, American International in Springfield, MA, John went into the army, trained at Fort Dix, NJ and was stationed at Fort Ord, California where he worked in a psychiatric unit at a rehabilitation hospital for returnees from Vietnam, many of whom had opioid addiction. John returned to college, U Mass Amherst, after the service and then went to work for Vivitar, in Springfield, MA and then Los Angeles, CA. He became executive director of the national accounts division and traveled extensively both nationally and internationally.

In 1993, John, his wife, Debra, and their three daughters, now grown, moved back to Cape Cod, where John and Debra had met, and they went into the real estate business. Both John and Debra work for Robert Paul Properties. John is also on the board of Trustees at the Centerville Library.

John is very pleased with our high attendance at Bowling, Golf, Investment Club and Rennie Discussion Group and he invites suggestions for new activities should members have interests not currently represented at OMC. As our By-Laws now allow members from all of Cape Cod, John also invites you to bring guests to our activities from Barnstable and all surrounding towns.

As this is our 60th OMC Anniversary, John is excited to have a celebration or charitable activity in which we all participate and “give back to the community”. Please share your ideas with John!

Did you know that John put himself through college playing gigs as the lead singer and base guitar player in a band? (He respectfully declined my invitation to play at our next meeting!)