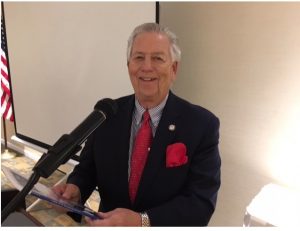 With a concept in mind that would endure with time.

In the beginning The Club “warmed-up“ in the Fox Hole

Once spirits consumed and attitudes adjusted,

fortified they’d cross over to Wimpy’s to dine

After sometime, the owner called foul.

Relative to the margins of libations versus food.

He requested, please have your drinks here!

The Mission of the group: “To promote good fellowship,

sociability, and to the well-being of the Community”.

Dues were two dollars per year.

There were no geographic limits

Membership, a limit of one hundred and fifty.

The 250 limit remains to this day.

The first meeting at Wimpy’s was noteworthy.

When the scheduled speaker didn’t show,

an OMC member, Dr. Wesley F Rennie “off the cuff”

presented a thought-provoking address on education.

clothing store. They were held there many a year

As recent as 2001 there was was one last pic-nic

At the estate. Widow Hollidge,

made a brief lakeside appearance to warmly

welcome the group and wish all best..

Golf was introduced as early as fifty eight

Those were different times, OMC played the big three

Our present traditions of Club Champion

And President’s Cups were scheduled way back then.

That’s some fifty-nine years before this year.

Amazing how many of our traditions beckon back to then.

Don Ellis was Chair of Golf in ‘98

A very affable chap; seldom talked much about his past

Word has it, he sported three Emmy’s in his pack.

In November ‘68, Producer Don was in the NBC “mobile truck”

to be followed by  the renowned Heidi all-star show.

At seven p.m. he gained infamy when cutting over, to Heidi,

In ’63 Rudolph R Lind was the first Bowling Chair

Chair loyalty is seen, there only has been ten Chairs in fifty-four years.

The last two, Fortier and Hulme span twenty-two and yet counting.

An Investment Discussion Group began in ‘65

was set up under the direction Wesley Rennie”

Advisor to the World Council of

Churches and President of Springfield College 1957-58

As a student of demographics, we can report

In it’s sixty years OMC has been led

by many generations. The medium age in 1957

was most likely younger than it is today.

was to the well-being of the community.

Many of  OMC’s first members were of the

generation born at the turn of the 20th century.

The Greatest Generation followed and ruled

And the “Boomers” stepping forth in the teens.

One pleasing finding is the OMC of the 60’s

Is yet the same OMC today

Nearly all of  today’s OMC programs

were instituted six decades ago

Aging demographics has had it’s challenge

The Cape’s late “Boomers” and the “Xer’s”

Have not come forth in near the numbers,

Today OMC’s Quality is equal to the best it has ever been.

Bowling and Golf are stronger than ever.

As are Rennie and Monthly Speakers.

Scholarship applicants and dollars remain at their best.

As does civic service and special events

OMC has morphed well with the times

and has not strayed from its excellent roots

Today OMC remains “THE MEN’S CLUB” based on Brotherhood,

Congeniality, and Service, at-large, to the Community

For more information on our history,